A Dog Returns to His Own Vomit 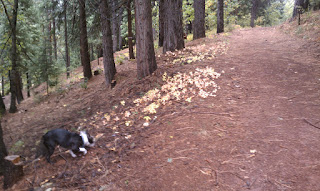 I was out walking my dog the other day.  We're having a nice walk and then all of a sudden he starts heaving and then he puked on the trail.  That wasn't so bad, but then he started to eat it.  Why puke it up and then eat it again?  Dogs are very nice animals, but they can be a little weird.  As he was lapping up his own vomit, it reminded me of the rotten political systems.  Every few years, there are elections.  Most political systems are democracies which give the people the illusion that they have a choice.  Regardless of who wins, they will do the same ugly things over and over again.  The public becomes outraged and they think that if they "vote the rascals out" that everything will be coming up roses.  But true to their nature, politicians will puke up the same old vomit of communism and then eat it again.  Albeit, they also expect the public to join in.

Democracy is the mask of the communist system
The idea that people who vote are actually choosing who will run the country is completely deluded.  Democracy is the happy-face or mask on the feudal-communist-socialist-fascist slave system.  The mask of democracy softens the political blows by making people think that their votes are effective.  If people actually have any choices, it is only who will be their next slave master.

Democracy produces kakistocracy
Kakistocracy is defined: "government by the worst persons; a form of government in which the worst persons are in power."  Up until a few days ago, I had never known this word.  But this is the true style of government.  Democracy produces kakistocracy because there are more unintelligent voters than there are ones who are intelligent.  In a democracy, the dummies make all of the important decisions of the body politic; if there really is one.  It is much easier to remain ignorant, uninformed, and stupid than it is to do research and use critical thinking.  People tend to want other people to make these judgments for them.  But if they are too stupid to think for themselves, how can they be smart enough to choose an intelligent candidate?  It doesn't make any sense.  So democracy is just a political scam to make people think they are choosing  their leaders.  And the end result is that the worst possible people are now the leaders of government.

Example of stupid politicians
In 2002, I had the very poor judgment in running for Congress.  I was at a candidates' night and the incumbents and the challengers were there.  We were allowed a limited presentation in which I stated that I would read every bill on which I would vote.  A state assemblyman took offense and stated that he read a lot of the laws before he voted.  I asked him if he read every one.  He said: "No."
I proceeded to ask him how many bills did he read and he said that he read around 450.  Then I asked him how many bills were put forward for voting and he said: "...forty-five hundred."  I then did a little grammar school math and from what I could figure, he only read 10% of the bills that were passed that year.  Imagine, a state that has 4500 bills up for voting and the "leaders" don't even read them.  I thanked him for proving my point.  This is how it really works.  It is absolutely stupid to vote for anyone knowing that he probably won't read very many of the bills or other important paperwork.  Remember the line for Obamacare: "have to pass it before we know what's in it."  This is incredibility stupid and it shows to me that the government as we know it is unnecessary.  Only stupid people would vote for such idiots.  But they do it every election season.  I was so offended by the political process that I eventually took my name off the voting rolls; never to see a voting booth again.

Voter returns to his own vomit
The voters puke up their political leaders and then have to eat the vomit of the bad results.  The bad results are self-evident.  Democracy is like a crack addict that doesn't get the message.  People vote and vote, year after year, with the same crappy results.  Maybe it is the fluoride in the water that makes people so dense in their thinking.  Maybe they've inhaled too many chemtrails.  But this nonsense has gone on for 228 years with no sign of it ending anytime soon.

Proverbial mistakes
Just as the proverb that says a "dog returns to his own vomit" is the condition of mankind in general terms.  His  mind has been dumbed down to the level that he accepts almost any form of slavery.  He didn't vote to be a slave, but he does it because he can't think critically.  It doesn't matter what a candidate says, because if he doesn't do it then he is a liar.  Using common sense, right reason and critical thinking will always get good results.  These three things will go a long way to produce the necessary corrections that could eliminate government as we know it today.  However, as long as people have low moral standards these governments are going to get much worse as they will need to control the chaos.  High moral standards remove the necessity for government.