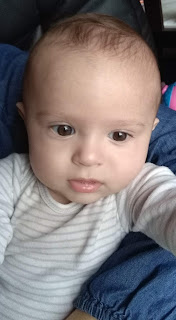 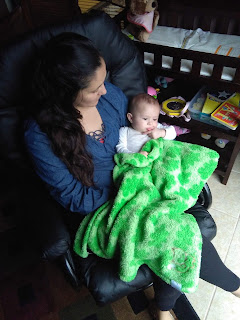 Look at this little man.  This is a little boy who was stolen or kidnapped by the DHR in the State of Alabama.  On October 11th, 2016, he was stripped from his mother's breast while she was breast nursing him.   There were no grounds for any probable cause and this is a clear case of the "government" kidnapping little white babies because there seems to be a big demand from them on the adoption market.  That's not to say children of other races are less desirable, but when there's a bigger market for the white babies, that would suggest a financial benefit to the DHR.  Think of the DHR as a type of Gestapo where the go on the prowl and search for weaknesses in families in order to procure children.  These children are then in even more danger because of the child Satanic abuse and child trafficking.  They look for weaknesses by asking questions.  They ask leading questions to the children and they will do this in the courtroom.  The DHR will use any excuse they can find to steal a child.  The torment on this family is horrible.
. Baby Holm with his mother, Danielle 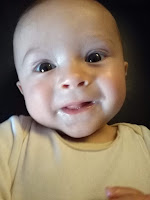 The Government attacks little children
The government thinks they are so so righteous, but imagine what must be going on in the mind of this little boy.  He knows there's something wrong but the people who are supposed to be adults cannot solve this problem.  And the reasons is that the DHR of the State of Alabama are slave traders and this little boy is a victim of modern-day slavery.  He has been taken from his rightful place with his mother and father and this activity by the retards in the government is destroying the family and society.  Unhappy families create a world of chaos for everyone involved.  What makes me furious are those of you who say things like: "Not all government people are evil."  I say: Yes, they are and they will always be evil because the evil is a direct result of the Luciferian system that infects our lives.  Just by the act of swearing oaths, the people who work for the entities called "government" are swearing to support the Luciferian system.  In fact, swearing oaths violates the commandment not to take the Lord's name in vain.  But this slave trafficking organization called the DHR will never stop unless the people force them to give it up.  I don't have words foul enough to describe what I think about this agency.  And the cops are just as bad.  With just a few questions, they could legally refuse to enforce unjust court orders.  In the case of baby Holm, there was no court order to take the child at the time it happened.  The DHR had zero grounds to even consider taking the child, unless, they are a supply line for providing little children for Satanic ritual abuse.  After all, there are a lot of sickos and perverts who feed off of the flesh of little children.  The cannibals need their food, so why not take a little baby?  They can't fight; they just have to take this crap.  Those people who are in the government and look the other way are just as bad as the ones who take the unlawful action. 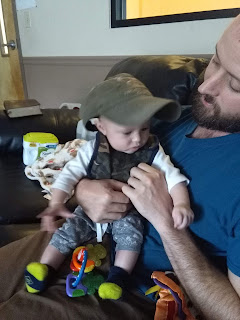 Baby Holm with his father Christian
Fortunately, this baby is allowed to see his mother and father three times a  week for 4 hours.  It's better than nothing but this did not need to happen.  The torment put on Christian and Danielle is unthinkable.  Those of us who have children would do anything to protect them from evil people.  I have read in other articles, that there is a 70% chance that the child will become endangered in the foster home.  We're all hoping for the best for this family, but this still doesn't look good.  They have tried to contact the Governor of Alabama.  They contacted the attorney general and they had the audacity to tell them that they didn't have jurisdiction.  Imagine that!  They told the truth.  They have gone to the spineless Sheriff who is actually afraid to enforce the law.  The district attorney will not speak with them and this whole courtroom proceeding is a fraud.  If the AG of Alabama doesn't have jurisdiction then how did the DHR of Alabama get it?  The answer to that question is obvious.  Neither the State of Alabama nor the DHR has jurisdiction and this is why jurisdiction must be challenged in all cases using the Satanic process as these courts.

The legal system is a big lie
Having a fair amount of experience in using the court system, my conclusion is that there is little truth going on in the courtroom.  The big culprit is the word GAMES that are played on John Doe, or John DOE, or JOHN DOE.  Grammatically speaking, just someone's name could be a topic for discussion that could last for hours.  Most people do not realize just how twisted the legal system has become.  Common words are turned into "terms" which means that the words used in pleadings and motions mean something other than the common understanding.  This produces confusion and misunderstandings that even the lawyers won't tell you.  For example, the word "person" can mean a trust, corporation, and or a "natural" person.  It is important to know what definition of person they are using against you, but they won't tell you.  In other words, the court system is a big lie and it is too confusing for most people to use. The courts use intimidation and violence against the mother and father of children so that they can support the government-sponsored child trafficking agenda.
Just to give the reader an idea how evil the DHR has been to the Holm family, they are presenting them with bills or monetary charges for child support.  That's right, child support.  The DHR stole their child and now wants child support.  My thinking here is that it is just more legal harassment to a family who just wants their baby returned so that they can go somewhere else and live in peace.
If there is any issue take points to the evil of government, child stealing, and trafficking is one of them that should cause the people to reconsider their options.  Evil is never necessary and it should never be an option.