The Level of the Devil 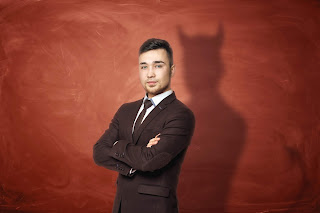 I have noticed that no matter what the government and the religious people say, nothing seems to get any better nor is there any improvement within the society.  For hundreds, if not thousands of years, there has been a steady decline in the moral standards and it keeps getting worse.  I've been frustrated in that no matter if people are right-wing or left-wing--or somewhere in the middle--nothing improves from a foundational standpoint.  Despite all of the various religions, society descends into the pit of hell in the complete immorality and the ineffectiveness of any opposition to the demonic "new world order."  The natural law dictates a certain level of morality and it is the same for everyone.  Just because someone has taken the authority of government or religion, doesn't make them exempt from the natural order.
I'm going to explain the reason why this situation doesn't get any better.  One can point to all of the problems as much as they want but it doesn't seem to make any difference.  The problems get worse as there is no resolution nor any improvement in the morality of society. While it is important for the people to understand the problems and to connect all of the dots, there still needs to be positive resolutions to the difficult problems.  The only solution that I see that would work is to institute good morality and teach it to young people.  But a government and religious systems which are on the “level of the devil” will never work toward improvement in moral values.
The level of the devil is simply this: it is the level of thought and actions which are rooted in the Satanic and the occult.  I have written extensively about the dangers of oath-taking and I think this is the leading cause of pain and suffering throughout the world.  People are pledging their lives to a demonic or Satanic system through the system of oath-taking.  What I believe happens is that the peoples’ minds become distorted and they exist in a type of Satanic stupor.  This might be the reason why people, when confronted with the truth, have a very difficult time understanding what has happened to them.  I think most people can’t believe it because it is so evil and most peoples’ minds do not want to go there; and rightfully so.  The problem is that our minds have been distorted through many years of indoctrination and false information.  Our responsibility as men and women is to maintain the moral order which the Creator intended.  Our perceptions must match the truth of a particular morality and all of us need to do better to stay in those boundaries.  Government and religion are not capable of staying within the proper moral boundaries because most of them—if not all—have oaths as their foundation.  Oath-taking, when taken by men, is evil and it is destructive.  We have thousands of years of written history to show that the oath is man’s biggest folly.  The only one who can keep an oath would be the real God himself.
Once the oath is taken, everything surrounding and founded upon it is going to be evil, stupid, and destructive.  Nothing works to the benefit of mankind.  There is no benefit in evil.  Nothing good comes from it.  The destructive chaos is evident in the world today.  So, oath-taking should be avoided and that will go a long way to solving a lot of problems.  It will be one way to stay away from the occult.  The people in the occult are oath-takers and first-class liars, thieves, and murders.  They operate on the level of the Devil.  This is the easiest way to begin to understand the operations of evil.  Most religions operate on oath-taking and most religions are sanctioned by the state.  We all could live without these two things quite nicely.
The importance of separating from these things cannot be overstated.  I've put some links below for further information on the subject.  Remember, the occult puts peoples' minds into a stupor which can be difficult to exit.  The mind control comes from all sides of an issue.  False opposition is always used and then when it is discovered, it tends to demoralize the people.  Don't let yourself be demoralized or discouraged because just by the simple act of separating from occult is a great start.  We can only improve our own morality and then set an example for others.  Groups tend to get corrupted, so it is important to work on improving our own moral conduct.  It's a bit of a daunting task at first, but it is worth the effort.

Related:
Swear Not At All
Swear an Oath, Tell a Lie
All Bad Things Flow from the Oath of a Man
Stop Swearing Oaths
Understanding Jurisdiction