Rights Do Not Come from any Government 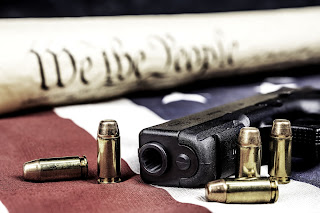 There has been a lot of discussion over the years about the "people's" right to bear arms.  Most people think that the Constitution for the United States grants these rights to the general public.  However, in the natural law or natural order, anyone has the right and duty to protect himself and his family from anyone who would do him harm; even if it means by the use of force.  There is a big difference between the legal system and the natural law.
The legal system is the rule of law put into place by people who claim authority over other people.  They make up their own rules and rarely do they hold themselves to the same standard.  We can see this daily in the news where one group of people are legally persecuted by the government, while others, who have done more horrific crimes, continue to be free from any kind of prosecution.
The legal system is a process that is evil and demonic and it is void of any virtue and common sense.  It is very arbitrary and deceiving.  Common words are redefined to say one thing but mean another.  The biggest problem is that this system, and even the Constitution, are based upon oath-taking which is evil unto themselves.  Rights do not come from manmade laws.
However, natural law operates exactly how the real God intended it to be.  If the Congress of the United States decided to suspend the law of gravity, nothing would change.  Everything would be just as it is with no change.  The ultimate authority is that of the real God who created everything and not some dried up parchment from a few hundred years ago.  Right reason and common sense fit in perfectly with the natural law and the natural order is the benchmark to use in making any decision.  To put it all in perspective, the governments of the world are nothing but a big "nothing burger."  They don't have any authority other than what they can take by using violence against other peaceful people.
I think that most of the world's problems stem from government and religion as they both call for the annihilation of certain groups of people.  Most of the religious writings call for the murder of men, women, and children which would violate the natural law.  The government even supports abortion which is the murder of the unborn.  It is legal, but it is unlawful under the natural order of life.
All of us have been subjected to living under the evil order.  Mankind should start to return to natural law and use it to his benefit.  All of us have made very stupid decisions over the years because of a lack of understanding of this natural order.  We should be listening to our "gut" feelings and do better in determining what is right and what is wrong.  Governments and religions are parasitic in their nature and they are not a benefit to society.  They are too destructive by reason of the continual lies and misinformation that they spew.
The right to protect oneself is not dependent on any government because those "rights" are a part of the natural order which is self-evident. Trying to get the government to fix what they screwed up is not productive.  The government and religions are immoral institutions who are not capable of doing good.  Any good that they may do is designed to be a cover for their evil.  But the natural law works well every time but most of us don't know how to use it.  We've become too dependent on government and religion.

Posted by Very Dumb Government at 10:23 AM