The Evil of Government and Religion 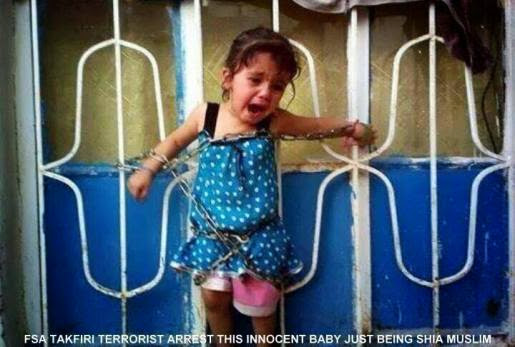 Here is a photograph of a 4 year-old little girl who was tied up by an anti-government militia in Syria and then she was forced to watch her parents be executed.  This is the most disgusting thing I've ever seen and I'm posting it to show the readers of this blog the abject evil of government and religion.

"According to Syrian Truth’s Facebook page, the above photo is of a toddler living in the Deir ez-Zor Governate in eastern Syria, bordering Iraq. She was tied up by members of the U.S.-supported “Free Syrian Army” — which is dominated by foreign, Sunni jihadis — and made to watch as her mother and father were killed for being Shia....."  See full story here.  (Link has been removed.)
Your tax dollars at work

That's right folks, your taxpayer supported dollars are being used by the Obama administration to support Middle East terrorists groups to kill and murder innocents in the name of what?  It doesn't get more satanic than this and if this doesn't wake you up, nothing will.
I've been saying for years that government and religion are the two most destructive forces on the face of the earth, and neither one is fit to exist.  Absolutely nothing would be better than this.  Imagine what this little girl has to live with for the rest of her life.  I can still remember parts of my life at 4 years old so I'm positive that this little girl will remember most of what she saw.  This kind of behavior would be an insult to associate with animals.  Animals wouldn't think of doing anything like this.

I don't care if it is Islam, Christianity,"Jewish," or any other religion, all I see coming from them is the most evil miscreants on the face of the earth.  These religions insult the commandments of God and they attempt to usurp the natural laws in their attempt to pervert the whole system of life that God created.  There is no excuse to treat anyone's child to this kind of abuse and the people who do this will suffer more times than this little child because their conscience will not allow them to escape their evil deeds.  Whoever did this will suffer more pain in their lives than this child.  Men and women never escape the conscience.  The conscience is there 24/7 and it never gives a man any relief.  While a person can repent, the damage is always in one's memory to torment them every second of their lives.

The mindset of junk religion

Whether it is Islam against the infidels, or the Jews against the goyim (non Jews), or the "Christians" against the heathens, the main factor is that these religions think of the others as animals, beasts, monsters, or just livestock.  This is why I object to the use of the word "human" as it refers to a monster and not a man or a woman.  They don't consider people other than themselves as men, women, or children.  They consider them beasts which in turn gives them the right to take the other one's life.  This is utterly disgusting and it has no place in any kind of peaceful society.  In my opinion, I would expect nothing more than this from any government or religion that is based upon the occult.  I cannot find one government or religion that is not based upon the occult.  But we the people turn a blind eye to this and we see the evil results of bad government and bad religion.

When governments interact with each other in such a vicious fashion, I cannot see the value in any of them.  They don't deserve to exist.  We would be all better off flushing them all down the toilet and start over with no government and no religion.  God isn't that stupid to establish this nonsense.  If people simply used the commandments, everything would be a lot more peaceful.  They are not there for the benefit of the people, but they are there to rob, kill, and maim as many people as they can because in being evil, they are not capable of doing anything else.  If it is stupid and evil, the government will do it.  And to think the United States government would fund such evil people that would do this to a child, well, it really is beyond me.

How does one fix this little girl?  Who is going to explain what happened to her and her parents when she grows up?  What justifies this kind of behavior?  Why is the United States government funding these military operations?  Satanic government and satanic religion is at the root of the evil.  So next time you go to church, temple, or whatever, just know that you're feeding the beast.  Every time you vote for one of the psychos who run for political office, ultimately, this is going to be the result.

The only solution is to keep the commandments; the ones that conform to the natural law.  The rest is just nonsense and has no spiritual or practical value to mankind.  The people who did this to her and the people who paid for this kind of military operation are cowards and their lives are destroyed already by being associated with it.
Related:
I first saw this story on Before It's News (Link has been removed.)