Dumb or Dumber for President 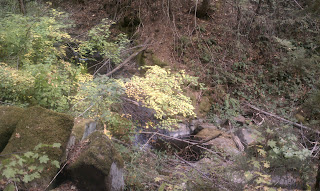 Last night, I tried to sit down and watch the debate between Mitt "the magic underwear" Romney and Barack "I forgot my birth certificate" Obama-Soetoro-Davis.  I don't know about anyone else, but just the idea of these two creeps running anything other than a lemonade stand makes me have nightmares.  I lasted 17 minutes before I had to shut it off because I felt that if I watched any more of it, I would be less intelligent and far more dumber than I am now.  I need everything I can get when it comes to intelligence, and I don't need the Presidential debates dumbing me down any further.  After decades of wasting time in school, I value whatever intelligence I have left.
After watching a series of videos about Mormons and their magic underwear, and the fact that they take showers with one hand touching their shorts is something that would come from a Jim Carey movie.  Mitt may or may not have the magic underwear, but who in their right mind would vote for such a man?  This election is a classic example of the failure and the uselessness of voting.
Can you imagine Mitt getting the call at 3:00AM.  And the first thing he thinks of is that he wants to make sure he's wearing his magic underwear.  "Mr. President, we are being attacked...."  Mitt: "Geez, were are my shorts?  I can't make a decision unless I'm touching them."  Mormons also believe that they can become gods, and this is the man who is going to be President?  I read an article by a lady who said it was wrong to sit out the voting, but when we look closely at this election, we can see that there is no such thing as political opposition.  It is always the same kind of losers day in and day out.  I don't believe in voting because it creates violent government.  No one is responsible for anything.  At least if we knew who voted to whom, we could sue them for the injury and collect some damages.  The only reason someone wants to run for anything is because they are psychotic losers who want to get better at it.
It gets better; or worse, depending on the circumstances.  Because of the statist mentality, everyone in the country has to have a birth certificate in order to do business.  However, Obama, the president of supposedly the greatest country in the world doesn't have one or won't disclose it.  Personally, I could care less because I don't think anyone should have a birth certificate.  Think about it, you have to prove who you are when you already know?  How dumb is that?  What is your birth date? Sorry, I was too young to remember.  Obama has proven he is an utter failure, but he needs another term to finish us off.  I can hardly wait for $10.00 per gallon gasoline, 40% unemployment, and the rest of the jobs going offshore.  Obviously, Obama isn't the answer.
I suggest just staying at home and sitting this election out.  It doesn't matter which turkey occupies the White House, because they are both losers.  Romney still supports NAFTA which helped to clear out of the United States over 46,000 factories. Is there going to be an economic recovery?  My answer is: With what?  Government is just too destructive to exist.  Voting for Romney isn't going to help anything and he isn't conservative.  Obama will make things even worse so why would anyone want to vote and condone this kind of behavior.     When anyone casts a vote, it is like saying:

Of course, most people don't think this, but the continued choice between dumb and dumber; evil or even more evil, is just not a good solution.  Maybe it is time to let the "state" fizzle into its own corruption.  This kind of system is just too destructive to continue.  The "state" has had over 6000 years of written history to show that it is always going to be a failure if it ignores God's commandments and the natural law.
Why do people keep voting?  Most of us have been brain-washed into thinking that we have a choice of who will be our leaders, when the exact opposite is true.  There is no choice for we the slaves.  Slaves don't have choices.  Slaves always have the choice of two evils.  To the government, the people are as livestock to be harvested.  When anyone votes, they are ensuring their own bondage.


Walter Allen Thompson is the author of The Grace of Repentance: Keeping God's Commandments
Posted by Very Dumb Government at 8:31 PM