Documenting Every Turd in the Cesspool 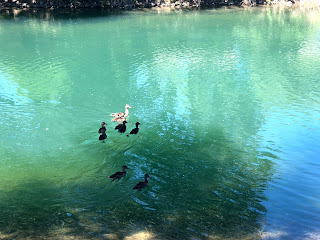 In the coming few days or weeks--depending on how I am able to learn to use Youtube-- I am planning to make some videos that address the idea of living within the natural law.  That natural law is the one that was established by the God who created the heavens and the earth.  It does not include evolution because there is no evidence for its existence.  If you want to listen to the fairytale of evolution, then you can get that elsewhere.  I prefer to use just the evidence that I can see and the experience of my years to make important judgments that are intended to improve life.
As a conspiracy observer, I can say that I have documented enough turds in the cesspool to last me a lifetime.  The problem with that is that this information doesn't turn the problem around into something better.  The same problems go on for years and years and it seems as though few people really care about it or are willing to do something about it.  Problems are to be solved and not to be perpetually documented with no solutions.  However, I have found that by using the natural law on a daily basis has kept me out of trouble and it has vastly improved my life.  I try to focus on what works rather than an endless litany of problems.  While it is important to understand and know what's wrong, and I'll continue to do that, I'll be attempting to focus on the solutions to problems using the natural law.

The natural law cannot be counterfeited.  It cannot be altered.  It provides all of the answers we need.  And if I don't understand something regarding the natural law, then I'll just have to live with it until the comprehension manifests itself.  The morality that is contained in the natural is self-evident and this morality is what is important to guide the behavior of mankind.  Men, women, and children are not animals like some people like to think.  We are a special part of creation that many political and religious leaders want to destroy.  They don't like it when people are happy and satisfied with their lives.  But the whole point of living a good life is that which stays within the natural order.  To this end, I'm going to attempt to put together a video series which will hopefully steer people in the right direction.  I've screwed up enough times to know that every time I ignored my gut feelings, I suffered dearly for it.  Those feelings are a part of the natural law and paying attention to them is extremely important when making critical decisions.

Last, the problem of pedophilia has become enormous.  The morality of the people, in general, has become so low, that even legislatures are now considering lowering the age for consensual sex of minors.  When sexual activity is examined within the natural law, we can clearly see that this kind of activity is so destructive that it is like throwing gasoline over the children and lighting it on fire.  The governments and the religions of the world are too corrupted to be salvaged to be of any benefit in solving this problem.  The people must solve this problem and they shouldn't look to the government to do it for them because the government is a major part of the problem; not the solution.  I will be using my video channel for this as well.

The idiocy of the governments and the religions are well known and they have had at least 4000 years of history to prove their worth or benefit to mankind and they have failed.

Documenting every turn in the cesspool isn't of much value and many others have done that with little results to show for it.  I'm going to try to focus more on the natural law in the future.