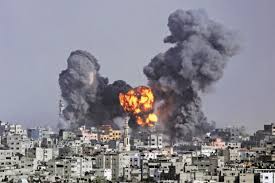 Is going to war or starting a war engaging in the act of committing a murder?  The obvious answer to that is yes, it is murder unless it is done in self-defense.  If the United States had hordes of soldiers invading the land then there is a cause for using a military because they are fighting in a defensive position.  But to start wars over political or financial issues crosses the line and that is never justified.  While a lot of people think war is a good thing; especially the neo-cons in the government, the facts show that when a war is started, the soldiers from both sides start to commit murder and it usually doesn't stop until both sides wear themselves out.

Wars are started by old men
In most instances, wars are started by old men.  They are the Freemasonic freaks from hell who enjoy the pain and suffering of others. They are government liars and thieves who cannot justify the killing and murder of people.  They are the sexual predators of little children who practice cannibalism; selling and eating their body parts.  They have no problem in setting off bombs and destroying thousands of people on one explosion.  These men are evil to the core because they give the orders to the military to kill people.  The problem for these old men is that their morality is almost nonexistant.  It is immoral to order people to war if it is not in self-defense.  They justify wars by lying to the people of the necessity to take some kind of action.  They may even stage "false flags" in order to justify an attack on someone.  But at the end of the day, these men have become murderers and they will destroy their own lives as well.  Being a murderer has no benefit and it will torment their conscience for the rest of their lives.  Just because something is legal doesn't make it moral.  If the action is immoral, then it should always be avoided.  War has increased because of the increase in the size of the governments.  There is too much power in the hands of the few.

The soldier is just as guilty
When a man joins the military, he subjects himself to all kinds of indignity.  He becomes a trained killer--murderer in most cases.  When the military man carries out an order to kill someone, is he a murderer?  In most cases, the answer is yes.  There is a reason why many military men are committing suicide.  I believe that the reason is that they can't live with their conscience and for them, it is better to end their own lives than to live with the pain of it.  The one who does the killing is just as guilty as the one who gave the order; perhaps even more so as he is the one who pulled the trigger.  We can see how the evil of war feeds on itself until it starts to burn itself out.  Most people never want a war for any reason.  The psychopaths in the government order the soldiers to do their dirty work, but both are guilty.

War isn't necessary
Given the advancement of technology, going to war is even more destructive than in the past.  More people can be killed with fewer resources.  The main problem here is the idea of government.  The governments of the world are too destructive and they are the ones who cause the problems; along with the religions.  Under the natural law, the people have the freedom to do as they wish as long as they don't hurt other people.  Love and kindness is a much better option than war and mayhem.  This is a perfect example as to why the morality of anything should be considered before taking action.  If something is going to be immoral, then it is going to cause the perp a lot of pain in the future; both for himself and his victims.

Posted by Very Dumb Government at 9:12 AM