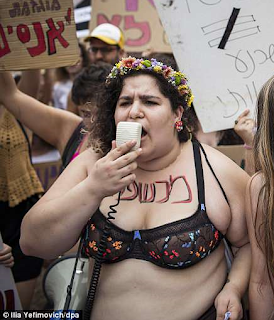 I was just about to go fix my breakfast and I see this photo of some fat woman participating in a "Slut Walk" in Tel Aviv.  Thankfully, I had already eaten a banana and so I didn't get the dry heaves.
The political people are nothing but sluts as they are constantly bringing down the rest of society with marches like these.  This march was supposedly done to protest rape and sexual abuse.  However, by stripping down to being almost completely nude, they are showing just how immodest and stupid the political class has become.

I am of the opinion that if anything is political and has to do with any government, it is stupid.  This is a perfect example of just how depraved is the political process.

The reason there is so much sexual abuse is the low level of morality. Lowering the moral standards by public display of their bodies is not going to fix anything.  You can't fix immorality by being immoral.  These women should find good husbands and raise good children.  This is the kind of activity that destroys society.

And are these "God's chosen people"?  Oy ve!

Walter Allen Thompson has a new book called Natural Law: The True Supreme Law of the Land
Posted by Very Dumb Government at 8:48 AM