Symbol of the Eagle

Barnabas 10:4Neither shalt thou eat eagle nor falcon nor kite nor crow. Thoushalt not, He saith, cleave unto, or be likened to, such men who nownot how to provide food for themselves by toil and sweat, but intheir lawlessness seize what belongeth to others, and as if they werewalking in guilelessness watch and search about for some one to robin their rapacity, just as these birds alone do not provide food forthemselves, but sit idle and seek how they may eat the meat thatbelongeth to others, being pestilent in their evil-doings 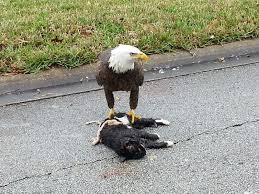 In the history of mankind, the eagle has always been a symbol of a predator.  And in the context of the alleged words of Barnabas, we can see that the lesson here is to not be like men who steal from other men.  And today, the government people continually steal from the people because they are too lazy to go out and get real work.  They are unproductive bastards who not only steal money, but they involve nations in endless war.  The governments' existence is certainly not deserved in the natural order of life.  And as in the above photo, mankind is like the poor animal run over by the new world order being plucked like a dead chicken until every bit of meat is consumed.
It is important to understand these symbols if only to know from what to remove yourself.  If you see the eagle displayed anywhere, just know that it is your warning that something bad is in the works.
In my opinion, the symbol of the eagle gives the warning that those who display it are communists which are just a warmed-over version of feudalism.

Related:
This quote came from the Epistle of Barnabus.  It's no wonder it was removed from use in the early Christian Church.
Two-Fingered Finger