Here is a Real Scandal 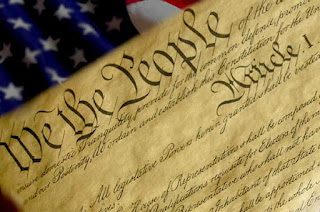 I just remembered that around 2001-2002 I visited the Secretary of State in California.  I went to the voter registration office and I had just one question.  I asked the clerk: "What does U.S. citizen" mean on the voter registration form.  She said: "No one ever asked me that before."  But she was determined to find out.  About 10 minutes later she came back and visibly confused or upset and she said: "It means that the person is a 14th Amendment citizen."  I thanked the lady and left and I wasn't sure nor did I comprehend the implications.  The constitution or the "supreme law of the land" is fake and it is a fraud.  All of us have been drawn into this fraud--unknowingly--and have signed legal documents under the "penalties of perjury."  Perjury is lying under oath.  People should never swear oaths and I've covered this extensively on this blog.  Most of the problem started with Abraham Lincoln, a contemporary of Karl Marx, who established the first income tax back in 1861. As you should know, the income tax is the second plank of the Communist Manifesto. To try to completely understand the evil and all of its implications can cause brain damage.  But the facts show that the 14th Amendment was a fake and a fraud but it is being used by the government to steal the resources of the people.  It establishes another form of government but they still call it the "United States."  Which incidentally, has at least 25 different definitions in the U.S. Code.  There is a corporate overlay posing as the government but the facts are showing that it is more of a private corporation all knitted together.

Laws have no authority other than violence
In my studies as a former income tax activist, I started reading the "laws" and "codes" more carefully and I came to realize that these laws have no authority other than the use of violence against those who dare to question them.  One of the worst examples of this was the counterfeiting of the constitution into something that was more acceptable for the new world order communist freaks.  The most egregious example of evil is to modify a document that claims to be the "law of the land."  The facts show that only the natural law as God created it is the real law of the land and manmade laws must conform to them.  The natural law is more dependable is it cannot be counterfeited.  It is the same for everyone.

The original 13th Amendment
Somewhere around 1809 to 1812, there was an amendment passed by Congress called The 13th Amendment. Now, I'm not a fan of the Constitution for the United States because it requires oath-taking.  However, I'm going to use this example to show just how crooked political leaders can be and how offensive government is to the rational mind.  Here's the text of the original 13th Amendment:
"If any citizen of the United States shall accept, claim, receive, or retain any title of nobility or honour, or shall without the consent of Congress accept and retain any present, pension, office, or emolument of any kind whatever, from any emperor, king, prince, or foreign power, such person shall cease to be a citizen of the United States and shall be incapable of holding any office of trust or profit under them, or either of them" Journal of the Senate

Under the original 13th amendment, lawyers, attorneys, or judges who carry the British title of nobility of "Esquire" would lose his citizenship.  This amendment was someone's stroke of genius in that it would have gotten rid of those "brood of vipers" called "Esquires."  In my opinion, this was a peaceful way of getting rid of the British influence within the government.  As the legal system stands now, it is just another arm of British tyranny and it exists to this very day.  I believe that all lawyers who want to practice law must do use under the title of nobility called Esquire.

Talk about conspiracies!  The Constitution of the United States, in just a few years in its existence, was unlawfully modified (by their own rules) and then pushed upon the American people and this is why we have so much trouble.  The basis of law is a big lie and a complete fraud.  If they did this to the Constitution I can only imagine what they've done with the Bible.  A lot of us income tax activists know about this fraud, but if we say anything, we're pointed out like crazy people.
In my opinion, this switch is much dirtier than the things that the Clintons have ever done. Because this counterfeit amendment went a long way to alter the basic form of government.  The constitution at that time was not as revered as some people think.  The reader can look up and get a copy of the Anti-Federalist Papers It just goes to show that the politicians of that day were completely corrupted and that corruption is still being used to this day.  I contend that when a group of people starts swearing oaths, nothing but trouble will follow.  We have plenty of history to support that statement.
So, when we speak to government officials, we really don't have the proper context because the constitution as we know it today is a fraud.  No one can speak intelligently while using such a corrupted document.  The Bill of Rights has been turned into a Bill of Privileges where the masterful government gives out privileges rather than respecting a man's rights.  If you don't believe me, try using them in court and see what happens.  This is a harsh lesson about the quality of people that we have had in the government in the past and it reflects the ongoing bullshit we'll have to endure in the future.  This scandal dwarfs all of the others because it counterfeits the whole process of the government that was previously instituted.  Remember, it is the lie that is always the primary weapon of the govtards.
This is why I'm more interested in the natural law because no man can change it nor can he counterfeit the laws.  No government would be better than what we have now.

Related:
The Original 13th Amendment along with the original 14th Amendment which was the anti-slavery amendment
The result of the switcharoo
Finding the Truth in a Field of Bullshit


Address of the International Working Men's Association to Abraham Lincoln, President of the United States of America