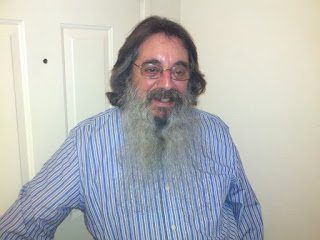 About fifteen years ago, I went to prison for questioning the veracity of the income tax laws, and during that time I made a study of God's commandments.  I did use the Bible, but after my experience with authorities and law,  I inherently do no trust writings any longer, and I had to have another way to confirm the writing just in case the scribble was in error.  What I did is to read the commandment and then see if I could find something in the natural law to where the two fit together.  Because I placed a high value on the commandments, I wanted to know if the commandment in Leviticus 19:27 made sense.  It says: "Ye shall not cut round the corners of your heads, neither shalt thou mar the tufts of thy beard."  Since it is a natural occurrence that a man grows a beard and that it is exclusive to a man, it made sense to me to stop shaving.  My only intent was to stay in line with the commandments and the natural law, and it was my hope that the beard would improve my life in some way.
A friend of mine had sent me a writing from Clement of Alexandria and in that writing, he called shaving effeminate and womanly.  I never considered myself in those two categories so that convinced me that Leviticus was a true statement and that I should grow out my beard.  What happened after that was remarkable as I wasn't quite prepared for it.
A lady supervisor in the kitchen said: "Thompson, when are you going to shave your facial hair?"  I responded: "When you grow a beard."  We had a good laugh over it and I continued to grow it.  One inmate said to me: "Why don't you shave?"  I asked: "Why?"  He said: "So you can be clean." I then asked him: "Do you shave your ass?"  He said with a red face: "No!"   I then said: "Well, you want to be clean don't you?"
The logic of shaving just doesn't make any sense.  I did it because it was considered "clean" and that facial hair was somehow dirty.  But I think there is another reason that shaving is encouraged.
Shaving is another way of submitting to the authority of government, schools, and the workplace.  I think that shaving is an act of submission and it is just another way to usurp the masculinity of the man.  As my beard grew, I became the target of more and more harassment.  Now, since I have a good sense of humor, this kind of razzing from the inmates didn't bother me; in fact, I enjoyed the attention.  I was once standing in line for food, and one guy says: "Hey Thompson, when are you going to shave your shit?"  I said something like: "Don't worry about it girly-face."  Once I said girly-face, some other inmates decided to grow their beards too.  But if shaving is effeminate and womanly, a man should never want to shave his face.
I think there is a great benefit to having a beard.  One thing I noticed right off the bat was that I was treated with a little more respect.  The Mexicans would call me: "Barbon."  But what was more satisfying than most anything is that I was obeying a commandment that I had been ignoring all my life.  Most religious organizations had their reasons not to grow beards, and if you look at so-called
"Christian" pastors today, most of them do not have beards.  I think that any man is missing the mark with a shaved face, I really do think that because I can actually feel the difference.  I feel a bit more on top of things with the beard.
In fact, I've seen a lot of before and after photos of men who have grown beards and they do look better with the beard.  If you Google "before and after beard photos" you'll be able to see the difference.  I think the beard looks much better.
The beard also shows that the man is presenting himself in a natural way.  I hadn't thought much about this before, but really, a smooth face looks great on a woman but not on a man.
I think women would respect men more if they looked more like a man.  I believe that men could reassert their masculinity by growing their beards as God intended.  I'm not saying that men with shaved faces aren't masculine, as much as shaving is a part of the new age brain-washing since the days of the Roman Empire.  If a man is created in the image of God, then it makes sense for him to look the way he was created.  I feel complete as a man.  I feel at the very least, intellectually stronger.  My health seems to be good for someone my age.
In today's world, men need all the help they can get to resist the feminist psychos.  Growing a beard will help get that done.