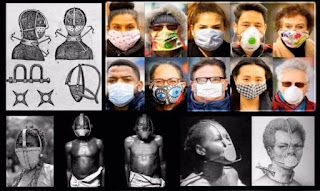 Because of the fake pandemic being put on the whole world, the morally retarded authorities of government are trying to make the people wear masks when they go out.  They are making the people think this is done for medical reasons because of the Cotex 19 virus.  There is no convincing evidence that the virus can be spread from person to person. Here is a very intelligent explanation about the virus of Swine Flu.  According to this man, a virus can only be put in the body of a man if he has been injected with it. https://youtu.be/Jg0YPMJDnKo  So why the mask?  In my view, the mask is intended to make people have poor relations with each other because it is completely unnatural for people to be wearing masks.  A mask is a form of brainwashing and it causes trauma to the mind.

When I went to the supermarket today, all of the checkers and most of the shoppers had a mask.  My reaction to it is that it pisses me off just to look at it.  I can't see anyone smiling.  It's like a hell I've never experienced.  The men look like a bunch of pussy-asses walking around like zombies.  The women look like idiots.  There is no other reason for this but to demoralize the people at every turn.
The store has these stupid arrows which means I'll be walking in the opposite direction of the arrows if I want to.

The mask is telling the people that they are slaves.  To the people who run the government, the people are considered slaves and/or livestock; animals.  The government is a slave system that involves sex trafficking and kidnapping of women and children.  If the government does this to the children, just think about what they will do to the rest of the people in the world.  These governments are run by assholes and nothing but shitty policies come out of them.  They are willing to collapse whole economies using the “invisible enemy” as the boogie man.

Some reasons why government is a slave system:
The reality of government is slavery in one form or another.  This should never be tolerated.  People should judge the government for what it really is: it is a big piece of shit and a scourge to mankind.
Watching the interactions among the countries is like watching a gang war that lasts forever.  Mankind should be able to live better than this.

Governments and religions use symbology to give you a warning about how they are going to screw us. Look again at the photo at the top of this article.  Print it out and show your friends the truth.  The masks are the symbols of slavery.  The masks are being used to condition our minds to be slaves.   It has nothing to do with any medical truth.   None of their edicts have any authority.  The only true authority is the natural law which the real God created.

Fortunately, the demons of the new world order will never overthrow the natural order which the real God created.  But they can sure make the peoples lives miserable.  I try not to pay any attention to them and live separate.  I try to stay away from them to the extent that it is possible.

These demons want to be God and they will attempt to do anything to get it done.  They put up false gods to distract our minds away from healthful intellectual activity.  They want us all to worship their idols which is basically themselves.

There seems to be an underlying evil entity that is the overlord of all of the governments of the world.   We can study history over and over but the facts show there’s a conscious evil that seems to be controlling the governments and also the religions.  I would try to stay away from both.   It is obvious by the bad results that what we have is not working and it will destroy us all if we continue to go along with it.  Wearing a mask means that the one who is wearing it is a liar.  It distorts the normal communications among the people.  It is a worse disrupter than a nuclear bomb and more damaging as it ruins the minds of the people.

Making the right choices will always get a better result.

Related:
How to Detect False Opposition
The Two-Fingered Finger