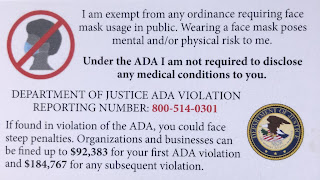 I had just finished posting my article called Mask of Evil, when I decided to have breakfast at my favorite restaurant.  I used to be a regular there for many years and had lunch there almost every day as their food was very good and the people who worked there were friendly.  Some of the people have been there since 1997.  I don’t eat out as much as I did but I decided to get some food and relax.

When I got there, it was like a horror show.  All of the employees had black masks on and the experience was insane.  I got extremely pissed off but I did manage to hold my tempter and not make a scene.  One of the waiters came by and said “I’ll be with you in a minute.”  I recognized his voice but I couldn’t tell who it was due to the mask.  When he came by to take my order, I got up and told him “I can’t put up with this mask shit.”  I told him that the mask distorts any social interaction with people and the black masks are creepy as hell.  He called over the manager who I have known for a long time.  He agreed with me but he said he had his own bills to pay and he doesn’t want to lose his job.  I understood that and I’m sure a lot of other restaurant workers feel the same way.

I told him that no government has the right to make anyone wear a mask.  In his case, the manager told me he had asthma problems and the face mask makes it worse.  I’m an advocate of using the natural law, and it only makes sense that breathing your own exhaust is going to have very bad physical effects.  In fact, there was a story in Northern Commiefornia where a man was driving his car while wearing a mask and he passed out and got in a very bad accident.  This is the kind of idiocy the the government likes to create: chaos.  I gave the manager a card to give to his management. (See image above). He thanked me and we parted on good terms.  However, I was still livid at how the system leverages people who can’t help themselves due to the fact they need to make a living.  It’s a comply or die type scenario.

There is no medical reason for any healthy person to wear a mask.  But I think the real reason for the implementation of these masks is to completely distort the social interaction of the people.  I don’t want to communicate with people who wear masks.  I’m a fairly thick-skinned man, but attempting to communicate with someone wearing a mask is frustrating.  The mask is very dark, evil, and it comes from hell.  The mask represents deceit and lying; nothing good comes from wearing it.

If someone wants to wear a mask, then that is their choice but I don’t think they will get anything good out of it.  Certainly, no one has the right to make you wear one.  Nor do I think any employer has the right to make their employees wear them as it is completely unnatural to be wearing a mask.  In addition, the business owner may incur a severe liability for making an employee wear them.  If a waitress is wearing a mask and passes out while serving hot food, that can be a major problem.  It’s just not worth it for any business to require it.  To have to work an 8 hour shift with a mask on has got to have extremely damaging effects on the wearer.

None of us were born with a mask and no government, business, or any other entity has the authority to require it to be worn.  It’s time to stop listening to stupid government people because all they care about is gaining more and more control over everyone.

Mask wearing warps the mind; the govtards are doing it on purpose and their intentions are not good.


Related:
Mask of Evil
Face Masks Can Pose a Risk for Healthy People

Posted by Very Dumb Government at 11:56 AM