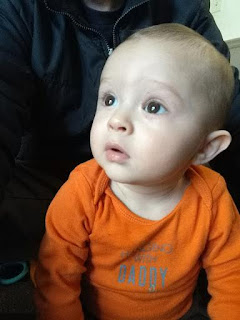 The dirty rotten baby stealers in the Alabama DHR still refuse to return him to the Holm family.  This is an example of why the government must be abolished and replaced with nothing.  The natural law has everything we need to live.  And stealing and kidnapping little babies is not one of them.  The Attorney General of Alabama refuses to act as they claim there is no jurisdiction, and the Supreme Court of the United States says that they have to exhaust all of their remedies before they can intervene.  The sheriff of the county is afraid of the feds if he acts.  The governor at the time of this baby's kidnapping, was having his own problems with sexual abuse, thus, he was of no help.  I think all of these agencies are trafficking in children.
A mother's worst fear is that their children might get abused and this has been my concern as well, but it is the kidnapping that is at issue.  In Danielle's comments, Item #1 is the most concerning.  The little boy is acting out and trying to communicate the abuse he has received in foster care.  This is a perfect example of how destructive the government is and they are screwing up the next generation of children.
The cops who allowed this to happen are crack-brained order followers and this is why people do not have respect for the cops.  They will do that which is immoral if a judge or a public official tells them to do it. 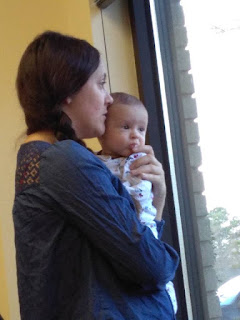 The following is from Danielle Holm as pictured above.
We have not seen our baby since November 17, 2017. At this visit, when he was acting out, we opened the door, and went right into the case workers office who was sitting on the other side of the 2 way watching us. We stood in her office, with our baby, to show her what was going on. She said NOTHING, sat there watched and smirked the entire time without a care.

This is what I said on facebook that day:

I have a BA degree majoring in Psychology and lots of CHILD psychology classes checked off the list, as well as field study in psychiatric hospital for pediatrics and adolescents. I know the answers to this. I need to hear from everyone and anyone reading this, YOUR HONEST opinions, PLEASE. These are not "what ifs". This is not speculation. This is REAL LIFE events I need honest answers to especially from those experienced.

What does it mean when a one year old baby boy:

1.) takes a stuffed animal, lays on top of it on the ground and kisses its mouth, while sticking his tongue out and licking the bears mouth?

2.) his little boy, baby penis is dry/cracked (could be normal, not exactly sure, he IS intact and may be not cleaned properly).

3.) his little boy, baby penis gets HARD when changing his diaper? Still may be normal.

4.) He will not stop moving, jumping everywhere, cannot focus on ANY one thing, refusing to fall asleep when he is noticeably exhausted, very sporadic, etc....( I understand busy, busy toddlers. I am talking about major anxiousness and nervousness, in a one year old infant .) I have taken care of MANY infants, toddlers. Some are busy. Some are distraught. There is a major difference.

5.) When he sees his mother and father, but ESPECIALLY his father, he LEAPS out of the other persons arms, and literally JUMPS into his father's arms in absolute excitement and happiness (almost RELIEF).

6.) When taken out of his father's arms, he squirms, kicks, cries and clings to his father. (Sometimes his mother as well if father is out of the room).

7.) Is ALWAYS looking to be in his father's lap, playing with father, sleeping on father when asleep, always seeking attention.

8.) When is walked away from his mother and father, looks at them with fear and cries with much distress, reaching out for them.

9.) When very visibly emotionally upset because of any of the above, starts hitting his head, with his own hand repeatedly and cries to the point of cannot breathe.

Keep in mind, when in the womb was fed nutrients from a very healthy mama. Only organic foods, lots of fruits and vegetables and protein. No drugs. No alcohol. No medications. No stress. LOTS of exercise. Prenatal Vitamins. Blood tests were ALWAYS perfect. Ultrasound was great. He was very calm in the womb. Everytime he was asked to move, he moved. When it was time to turn, he turned. Born perfectly healthy, very calm. Breastfed immediately, until of course the next day when he was violently ripped away. He was VERY calm, alert, attentive, quiet. He is now a changed baby boy.

This is OUR baby boy at our last visit. After exposing this and exposing them for their fraud and deceit, they attempted to put on a restraining order, told us we are not allowed to visit, come to DHR, nor call on the phone or communicate in any way. We are not allowed to know where our baby is, who he is with, or anything about his life.