Natural Law is the Supreme Law of the Land 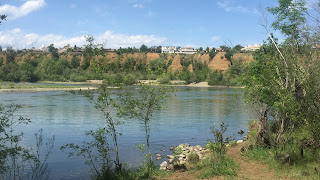 One of the biggest problems of society, in general, is the idea of looking at the government as if it is a substitute for God.  The United States Constitution makes the claim of being "the supreme law of the land" yet its authority comes from men and not the God who created the heavens and the earth.  And the problem is that all religions seem to blend their beliefs with the culture of the STATE, State, or state blurring the lines between the religions and the nations.  The absurdity of this false sense of authority is obvious to anyone who is paying attention. The state is not God nor will it ever be, but that doesn't stop the states from developing a god-like sense of authority which is actually evil to the core.  I'd like to develop this point with a few examples.

Murder violates natural law
When any government orders its soldiers to kill other people, we have the same problem as we did with the example of the law of gravity.  Killing people in all of the various wars violates natural law and this should be a good reason never to join the military.  While a man may find himself in combat, he has to defend himself but perhaps it would have been better not to get himself in that situation in the first place.  Just because a king or President orders a man to kill someone doesn't mean that the killing is justified.  Whoever is going to do the killing must make the proper judgment himself.  The military should only be used for defensive purposes only where there is no question of the lawful killing of an attacker.  Just because a govtard orders a killing doesn't mean that the one executing the order is without guilt.  The problem with wars is that they really never solve anything and they tend to start even more conflicts.  The communists will create wars and conflicts in order to take control over any group of people.  But they like to have other people do their dirty work.  They make other people violate God's laws which will make them just as guilty as the ones who gave the orders.  There is really no moral justification for any of the modern wars.  It would only follow that there is no moral justification to participate in any military operations which demand the murder of innocent people.  Obviously, war violates the natural order that God created and the fruit of war is always more war; especially when talking about the United States.

Murder in religious writings
There are many examples in the Quran and the Bible where it is demanded that various groups of people should be killed.  There may be more writings that do this, but these two I mention I have personally read.  I had always wondered why these kinds of verses are in these religions of "peace." The inconsistency of these calls for killing people flies in the face of the natural law and the commandments.  This is another example why I do not take most religious seriously any longer.  There is just too much opportunity for these writings to mislead people into error, thus, destroying their lives.


Too much time spent on things that don't matter
It is important to understand what is wrong with everything but it is more important to focus on those things which will improve our lives.  I struggle with this just like everyone else.  However, it is not important to know about every evil there is in the world.  After a certain point, there is no profit in examining every turd in the cesspool.  Our focus on life should be this: How to improve our decision making between right and wrong, good and evil?  I am of the opinion that if everyone used the natural law as God created it, we will all eventually come up with the same answers to our questions.  While we cannot see God, we can see the evidence of his creation and that is the testimony as to how things shall be.  It is more honorable to be virtuous, honest, loving, along with having good manners.  That is what really counts and it improves the lives of those who choose the way of goodness.  And one of the keys to getting this done is to know that the natural law as God created it is the last word as it is that natural law that contains all truth.  There is no man-made law that has any authority over God's natural law.  There is no declaration of "science" that can overrule the natural law.  And this is why I think the natural law should be used as a tool that was given to us by God.
Just to be clear, natural law does not include anything regarding evolution.  Evolution does not exist and it is just another communist fairy-tale to make men and women think that they are animals.

Government and religion are a form of slavery
I think the worst form of slavery is that of the mind.  And there is no shortage of poppycock that comes from these two sources.  The teachings of the government and the religions cannot override the natural law.  Man-made laws are never "the supreme law of the land."