I Wish I Had A Woman as Nice as My Dog 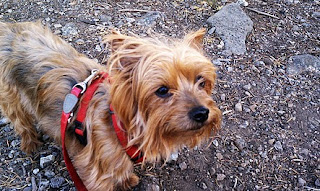 I was getting out of my car this morning, and my little Yorkie  stuck out her paw and scrapped it on my hand wanting me to pet her. She's so nice.  She does this a lot--though it's a bit annoying when I'm driving--because all she wants is some love and a little attention.  I pet her on the head and she's happy, and will lay down and sleep on a longer trip.
A dog will give a man unconditional love; whereas, a woman may or may not keep you around depending upon the prevailing winds.  I don't have to buy my dog a food dish lined with jewels.
My dog doesn't get crabby and vicious for no reason because she loves me unconditionally.  My dog doesn't run up a charge account at Macy's, and she doesn't spend $50.00 to do her nails.  My dog doesn't take drugs, drink alcohol, or crash my brand new car.  My dog doesn't stand there and "bitch me out" for not being sensitive to her needs.  All my dog needs is a little love, attention, and her food.  Overall, the quality of life with my dog has far exceeded any relationship I have had with any woman.  If you want to know where you stand with a woman, just run out of money.   If you have a woman that stays with you when you're broke or in a setback, then you have a good one.   The value of any relationship depends upon unconditional love, and that's more evident with my dog.
My guess is that animals are not subject to evil as people are.  Even wild animals seem to be more behaved than mankind.  Animals don't strap explosives on themselves and then go blow up other animals.  You don't see eagles or vultures flying over the elephants dropping bombs on them.  When was the last time you saw a socialist animal?  Animals don't shave their faces, armpits, or legs, put on makeup, they don't get pierced or get tattoos, take drugs, engage in homosexual activities,  nor do they cross-dress.  You will never see a male lion shave his mane nor his beard in order to look like a female lion.  You don't see them working on their "six pack" (I have a one pack).  You'll never see animals joining the freemasons or other satanic cults.  Animals have more freedom than people.
So when some of you call a woman a "bitch" think about what you are saying.  The word "bitch" means a female dog.  So if you are going to use the word with its true meaning, you would actually be insulting female dogs, because the dogs have better behavior than many women.  You can blame a lot that on the feminist movement, but also, because men and women refuse to stay within their natural order of life, which are God's commandments.  I would never insult my dog by calling Gloria Allred a "bitch".  I'm trying to maintain a higher standard; I would call her a feminist but not a bitch.  The feminist movement has made many of our women unseemly wenches.  Raise the moral standards, and the problems will subside.  It's not like there's no solution.
I love my bitch and I don't want to say anything to offend her.  My bitch is sweet, my bitch is lovable, my bitch is kind, my bitch is considerate, and she hardly causes me any trouble.  She doesn't mess with my mind; doesn't say yes today and no tomorrow.  She doesn't tell me she loves me today, but tomorrow she wants a divorce. My dog doesn't pole dance at drunken parties. My dog doesn't pick up "stud muffins" at bars. My dog doesn't make porno films.  My dog doesn't take me to court (you lawyers..don't get any ideas) and she doesn't make any unreasonable demands.  It is a perfect relationship as I don't have to entertain any of her relatives.  My dog is my friend and not my adversary.
If I was ever to consider getting married again, the woman would have to (at the very least)  rise to the level of the behavior of my beautiful little dog.  Dogs and animals stay within the natural order in which God created; many people do not.


Posted by Very Dumb Government at 9:25 AM