The Sun Orbits the Earth? 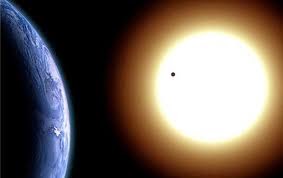 One of the ways I try to learn something is to take the position of the opponent and then study their arguments and use them to see if what they are saying is true.  A few years ago, I ran into an article called: a Geocentricity Primer by a Ph. D in astronomy called Geraldus Bouw.  Here he shows that the bible is geocentric (universe revolving around the earth) as opposed to heliocentric (universe revolves around the sun).  I recommend that the reader spend a few hours and read this small book on the subject.  Some of it is over my head, but Dr. Bouw makes the statement that the sun does indeed orbit the earth.  Just today, there is even a Muslim cleric who is saying the same thing and people in the media are making fun of him.  I'm not a Muslim, but it looks like the cleric made the right call.

Who are you going to believe?  The scientists "so-called" or your lyin' eyes?

When I wake up in the morning, I see the sun rise in the east and in the evening it sets in the west.  The sun then makes its way around the earth, to reappear in the east in the morning.  It has been this way since the creation.  I can understand it because I can see it.  But the scientific liars, are attempting to turn the natural order on its head and for the last 500 years or so, they have made the stupid claim that the earth revolves around the sun.  One of the motivations Dr. Bouw thinks is true is that there had to be a way to attempt to discredit the bible which is clearly geocentric.  In fact, I've seen modifications in the text between the Geneva Bible and the King James Version that show that this heliocentric idea was intended to be a big lie, possibly to train the minds of men to be able to readily accept lies by altering the text of the two versions.  It looks like an attempt by the "church" to condition the minds of the readers of the bible to accept the possibility of heliocentricity.

Lies are a form of mind control

In order to bring the world total chaos, the minds of mankind must be altered in order for them to accept the idea of stupid or a lie. The satanic mind constantly attempts to alter the natural order and invert it into something that does not exist.  Evolution is another example of blatant lies that people gobble up at colleges and universities.  And the problem with the lies is that it lowers the intelligence of those who hear them.  A lie is a direct assault on the mind and if people are not on their guard they will believe the lie and then become more uninformed that if he had never heard the stupid thing in the first place.

One of the reasons that stood out in Bouw's book is the fact that there has not been one experiment in modern times to prove the motion of the earth.  There have been numerous experiments, and none has been able to detect the movement of the earth.  To me, it's a nonevent because I already knew that as I don't feel any movement, and at an alleged 1000 MPH we would certainly feel the bad effects of it.  The mountains would make sonic booms at around 600 mpg and the wind turbulence would make life on earth unlivable.
I used to fly airplanes, and one of the things I immediately noticed is that if the earth is rotating at
1000 MPH and my airplane only cruises at 150 MPH;  depending on the direction I am going, I could not make much progress against 1000 MPH and the ground would be going too fast if I was going in the same direction.
It is worth the reader's time to go over the facts of this issue from other sources as I am mostly interested as to why they would lie about the natural order.

In my opinion, Satanists (government and religious leaders) lie in order to create chaos and out of that chaos they take control.  The want to take the joy and the good substances out of everyone's lives, and replace it with evil, chaos, and slavery.  Government and religion are two systems of slavery and servitude.  Each one thinks or would like to think that God sent them and that they can do no wrong.  However, the evidence shows, that after thousands of years of written history, each government has been a complete and abject failures.  The results tell the tale.
They lied about the sun revolving around the earth, possibly to get the population of the world to more easily accept lies.  Once the natural order was restated into satanic principles, then it is only natural that evolution would further deplete the minds of mankind.  And today, evolution along with "global warming" is attempting to do the same thing. Many scientists are bigger bullshitters than any politician or religious leader.  Most religions pull the most stupid doctrines out of their collective rear ends and then tell us "God said it."  If it doesn't match the natural order, God didn't say it.
The lying is intentional.  Lies are designed to lower the intelligence of every man, woman, and child.  When a man has the bogus information, and then takes action on it, the outcome of his actions will always turn sour.  And to a Satanist, that's the whole point.  The lies are designed to upset the natural order that man was designed to live in and replace it with evil.
This is why children are taught to accept homosexuals.  Homos violate the natural order of life.  You don't need any written document to explain or understand it.  The act alone is so bad, that it is abhorrent to the mind that is in tune with the natural order.  With the lie that homosexuality is acceptable, the children are given and extremely poor foundation from which to build their lives.  This is one of the biggest reason why I think most schools should be abolished.  And, of course, they are also taught heliocentricity, which is at best only a theory, and evolution which is a total fraud.

I know some people will think that I believe that the earth is flat.  However, one can clearly see that it is a sphere.   The idea that the sun orbits the earth to me is a known fact and all you have to do is to look at it.  People need to learn to think for themselves.  All truth lies in the veracity of the facts.  Facts cannot be assumed.  However, there are those people who when presented with the facts, double down on the lies.  Perhaps, they don't like looking stupid for believing such nonsense.
Most of the problem lies in that all of us were taught a bunch of garbage and so it is natural to withdraw when presented with facts that contradict a commonly held belief.  The earth revolving around the sun is utter nonsense when given the facts.  The desire of government and religious leaders is nothing new, the only thing that changes is the calendar and the style, but the substance is the same; lies.