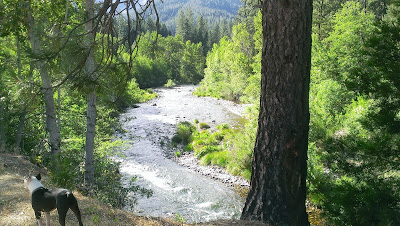 One of my earliest memories of my childhood was when I was outside playing, and some of the other kids were starting to pick on me. I was five years old and while I was a friendly child, I had a tendency to be careful about who I associated with and I stayed to myself until I got to know someone better.  They were taunting me, so I remember standing up, squaring my shoulders, and I called them all a bunch of niggers.  Mind you, these were all white kids.  I didn't know quite what the word meant other than referring to black people, but the main reason I used it is because the word itself sounded powerful and I didn't know any other dirty words.  So, the kids who were taunting me ran to my mom who became completely enraged that I would use such a word.

I couldn't believe how angry my mom got at me.  I got chewed out from one end to the other for using the word "nigger."  This was the first time I experienced my mom's wrath. The only other time I got that treatment was when I didn't show up for dinner when I said I would.  I learned very quickly not to do that; it was just too much to bear.   She eventually told me that as a member of an Italian family, the KKK would burn crosses on her family's lawn, just because they were from an Italian immigrant family.  She proceeded to explain that the race or color of one's skin is not an indication of a man or woman's character.  This was long before Martin Luther King came along.  It made sense to me and I never used that word again as an attack on another person.  I learned my lesson, and racism was never a part of my life.  And besides, a racist who lives in Los Angeles area is not going to fair very well.  This was a shocking lesson for a five year old but I never forgot the incident.  I learned to treat people of all races the same as anyone else, and I judge people by their conduct and their character, rather than by skin color.

Growing up in Los Angeles

I don't remember seeing very much racism in Los Angeles, because it seemed like everyone was from somewhere else.  I went to school with children from all kinds of racial backgrounds so it wasn't a big deal to most of us.  But the racism started to pick up during the "civil rights" movement and it became more of a problem.  Granted, I grew up in an area where I didn't see it, so I can only speak about my own experience, but to me it was just a big waste of time.  In my opinion, racism is a tool used to exploit people by the religious and political leaders.  It is the political leaders who fuel the fires of racism and not the people themselves.

When I went to prison for opposing the communist slave tax, I experienced racism in a way that I had never expected.
I would get lectured by a black man on the horrors of white racism and I told him that racism is something only very stupid people engage in.  No one can do anything about their own race as they are born with it.  So to judge someone just using race as a factor, is about as stupid as anyone can get.  One day, I wanted to watch the Oakland Raiders game on TV.  The game was on in the "black" TV room.  Yes, only blacks could be in the room.  Since I was new to this kind of thing, I didn't take it seriously.  I pulled up a chair and I proceeded to watch the game.  The same black man who told me about white racism, now came up to me and said something like: "Thompson, you have to leave this room, this is just for black guys."  I came unglued, and I chastised all of them for the obvious hypocrisy.  I told him that he was just as screwed up as the white racists. I told him that he was as bad as the "white" racists.  It seems that people don't learn their lessons of life very well.
However, I've also had the opposite experience.  In another prison, I was sitting at the "black" table.  I was new and I wasn't aware of it until some skin head nazi type came over and told me to leave because that was the "black's" table.  He was right, because the black guys were all standing around waiting for me to get up, but none of them had the balls to tell me why.  Rather than get my ass beat, I moved to a bench in view of this table.  Then, one of the black guys says: "Hey Thompson, if you would like to sit with us and have some good conversation, you are welcome to join us."  I got off my bench and joined the black guys at their "black" table and we got along just fine.  We argued about almost everything and we had a great time doing it.

Some Jews complain about racism then turn around and call non Jews "goyim" which means something less than a man or a woman; an animal.  This can also be seen in the idiotic teachings of evolution where the suggestion that mankind came from monkeys.   This kind of racism is inflicted upon all the other races by some Jews and it permeates through the political and religious classes.  These are the so-called elite Jews who do everything to make everyone's life miserable because of their psychotic control over society.  It is my opinion that the people who complain the most about racism are the ones who like to cause trouble among the races.

The best way to avoid racism is to never engage in the subject matter.  Racism is just a tool of the elite psychos to fulminate hatred among the races.  In fact, I don't hardly ever see racism, but all we have to do is to turn on the media and we are always confronted with it.  Race, in and of itself, is not something that most people discuss because it simply is not important.  Any kind of racist trouble is usually instigated by a political or religious group; which in my mind are nothing more than idiotic organizations set up to cause trouble rather than peaceful living among all people.  You see, a man or woman cannot do anything about their race, but they can do a lot about their own conduct and behavior which in turn will determine the quality of their character.

Anyone who is a racist is demonstrating that he has very bad character.  No man can determine his race.  He has what he has and there is no way to change it.  For anyone to judge a man simply by his race is a very stupid person, and a person like this doesn't deserve anyone's attention.  Professional race-baiters like Al Sharpton and Jesse Jackson clearly demonstrate the idiocy of the "civil rights" movement.  These people make race relations much worse than they need to be because they are fundamentally assholes.  Most people get along just fine as they just want to live their lives in peace.  These so-called racial issues are perspicuously intended to disrupt the peaceful natural order and to inflict more chaos and disorder by having more intrusive government.

While I was in prison, and Barack Obama was running for President, and almost all the black inmates were for Obama, Soetoro, or whatever name he goes by.  Because I was an old man and could get away with this nonsense, I would tell them that Obama was a white guy; just a little darker than most.  This would really piss them off, especially when I told them that Obama is the first white President who claimed to be black.
If I use the same criteria Obama uses on himself, I could make the claim that George Zimmerman is a Mexican because he too is of mixed race.  So,  Al Sharpton and Jesse Jackson should to go after the Mexicans for the shooting of the thug who attacked him  I mean, it only makes sense to me.  While this is a bit silly, the real issue is that race cannot ever be a factor to make any kind of judgment about a man's character.  However, if he acts like an idiot, then he probably is an idiot.  So these so-called black leaders are constantly making white people the whipping boy for black people who otherwise wouldn't be racists in the first place.  Sharpton, Obama, Jackson, and many others use the issue of race to deliberately cause trouble when it otherwise wouldn't exist.  The purpose of these leaders is to fan the flames of racism; otherwise, they would be out of a job.  They create trouble where none should exist.

This is a bit of a mental shift, but what I try to do is to avoid the issue of race altogether.  If a man acts like a jerk, then that's what he is and there's no point in pointing to his race. A jerk is a jerk; his bad conduct shows that he's a jerk.   Race really doesn't have much to do with anything other than the fact it is a fact that no one can do anything about it.  To me, a racist is a complete miscreant and it is self-evident.  Why would anyone want to consider one word that comes from the mouth of a racist?  A man's race doesn't mean anything, other than it may point to a part of the world from which he was born.  What difference does it make?  Each man and woman should be judged solely upon their own conduct and character.  However, the religious and political types just love to stir the racial pot to cause chaos among the people.  It is better to simply avoid any conversation regarding racism because it is always a none issue.  A man or woman's race is simply a part of the natural order so there's no point in debating such a stupid issue.  A man's race doesn't mean anything.

Posted by Very Dumb Government at 10:45 AM