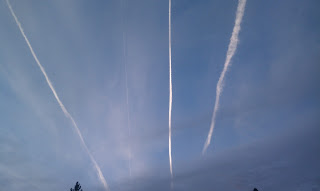 I woke up in a very good mood this morning because I had a decent nights sleep.  I
walked outside and I saw what I have usually seen since 1997; chem trails.  If there was ever a reason to get rid of government, I think this type of thing is a perfect reason why.  I don't know who the fruit-loop is who though this up, but it had to be the most evil person on the planet or a combination thereof.
This is a perfect example of govtards at their worst.  They are spraying a variety of chemicals and they are in effect medicating the whole country whether they like it or not.  This is the purpose of a good govtard.  Just do the most stupid and insane thing you can and then deny it even exists.

I'm not going to get into all the details of  chem trails because others have done that, but what amazes me is how many people don't seem to care or understand and that their health may be in jeopardy.
Recently, I pointed to the sky to a local store owner and he said it is the first time he has ever seen them.  But what was even more shocking is that many people don't even question it.  With this kind of system, what would stop them from spraying something lethal and kill millions of people?  Who is controlling the security for this practice?  Nothing really, but when this is brought up to the local govtards, they don't seem to be a bit concerned.  They never answer any questions about the practice or they come up with the ridiculous reason such as they are contrails.
The same thing goes with fluoride in the water.  There are a lot of health risks to ingesting fluoride but most people don't question this deadly practice.  Now that there is going to be gubbermint health care, you can see just how disgusting the whole situation can become.
For this reason alone people should be rethinking the value of government.  If the government is going to be this intrusive, maybe it is time to flush the whole thing down the toilet, start over, and simply allow people to live their own lives in peace.  Government as we know it has destroyed just about everything in its path, and God only knows how pleasant live would be without it.
Am I advocating anarchy?  That term seems to be associated with groups of people I don't agree with entirely. I don't believe in violent revolutions.  To make any meaningful changes, people in general need to have a change of heart about a lot of things.   But people do better when they are free to choose who they want to associate with and participate in projects that they want to support.  As long as people respect other people and let them live in peace, I think that would be the better way to go.  Government as we know it today is a proven failure and there's really no sense in it.  If it is based upon an evil foundation, then what good is it?
I can't say much about the intent of the chem trails, but given the 20/20 vision of history, we can see that any government that is so arrogant to medicate the population, has nothing good in its intention.   This kind of thing has been going on for decades.  But I have to ask the question: Does anyone really care?  I know some do, but from what I've seen, most people are in denial.
What would happen if one morning we all walk outside and get sprayed with something lethal?  Then it will be too late.  I'd tell you to write your congressman but that would be like pissing up a rope.
My take on this is that government as we have known it all of our lives has never been useful.  It's not a necessary evil; evil is not necessary.  If everyone abided in the natural "law" then life would certainly be more pleasant and we wouldn't have to deal with the govtards.  Chem trails are the modern day "black helicopters" and they are as dangerous to your health as one can imagine.  Who makes the decisions about what chemical gets sprayed?  For what purpose?
As for the pilots who fly these routes, what kind of person are you who would spray your own family and friends?  This I cannot understand.


Walter Allen Thompson is the author of The Grace of Repentance: Keeping God's Commandments
Posted by Very Dumb Government at 1:05 PM