Duck Dynasty: This Quacks Me Up 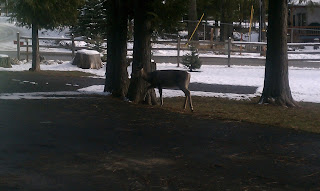 Recently, Phil Robertson, one of the cast of the extremely popular TV show Duck Dynasty, did an interview with Gentleman's Quarterly, and he gave his opinion on homosexuals.  While his description was a bit gross in its presentation, he was right on.  The idea of a man sticking his gadget in another man's butt is so offensive that it defies the imagination.  I've been known to make similar statements about homos and when you get that graphic, the disgust of the act becomes very apparent.  While the remarks are truly disgusting, they reflect the acts of homosexual men which is completely repugnant to the natural law.

Homosexuals a civil right issue?
The network A & E suspended Robertson from the show in an effort to punish him for expressing his opinion.  His opinion was spot on, and most of the people in the country agree with him.  The other members of the cast have stood behind him, and now A & E is in a real fix.  With approximately 14 million viewers, it is obvious that if they tamper with a successful formula, they can go down to 14 viewers in very little time.  As of this date, the reports are showing that public support is on the side of Robertson, and the homo community (if you want to call it that) has lost a lot of credibility; and that's as it should be.
This may be another case of suicidal marketing on the part of A & E.  Suspending one of the main stars of the cast will only hurt the show, but just like any other business, A & E is supposed to be making a profit for its owners and stockholders.  To take a show with that many viewers and then tamper with it just because a cast member gave an interview to a magazine, regardless of the content, is simply ludicrous.  Why jeopardize a market position when you don't have to?  A & E is making no friends with this move and the homo groups are just too small to make up for the demographics.  And if A & E supports the "LGBT" community, then they are just as much a part of the problem.  In my years of sales and marketing, I've never been able to sell products to a pissed-off customer.  And by suspending Robertson, A & E has angered 14 million customer who actually have money to spend.

Is criticizing homosexuals discrimination?
The short answer is no.  Homosexual activities are things that are chosen; whereas, a person's race is something that they can't do anything about.  Whatever race a person has is not something that they choose.  Homosexual activity is something that a person chooses and it does not occur under Ithe natural law.  Homosexual activity destroys the person who engages in it and it ruins the good relationships they should be having with other people.  Whether homos know it or not, they are not well-liked by anyone because most people have a latent knowledge under the natural law that this behavior is just wrong.  Homos in general are rude, obnoxious, immature, and generally a scourge to society.  I don't even want to touch the office equipment they touch.  I don't want to be in the same office with them or any other kind of work environment as they are pushy and they promote their perversion.
What is encouraging about this Duck Dynasty incident is that most people agree with Robertson's freedom to speak-out on this subject and bring in some common sense to this issue.  The homos are the ones who are destroying themselves, and they know it.  They know they will have no children.  They know they will most likely die an early death because of STDs.  And they know that the vast majority of people do not appreciate their disgusting life-style.  So, people who wish to separate from people with this kind of behavior are not discriminating, but they are exercising their options regarding with whom they associate.  I do not like to be in the same room with any homo at any level if I can help it.  I frankly, don't like anything about them.


Suicidal marketing........
If this situation wasn't so twisted, it would almost be comical; a real quack up.  But this is the corporate mentality: Shoot your own racehorses. There's no good deed that goes unpunished and no stupid move that isn't tried at least once. Usually, if it fails, do it again. I don't think A & E is going to recover from the loss of this situation.  I suggest that the executives at this network learn the difference between the meaning of a behavior and race.  Homosexuality is not a civil rights issue; it is a behavior issue just as Robertson so graphically pointed out.

Watch the marketplace do it's job
The bright side of this is watching the marketplace do its job very efficiently.  When anyone puts forth a product or service that someone wants, then that's were there is going to be economic success, regardless of what the dumb corporate executives say.  Good products and good service sells. If Duck Dynasty is a good product, then someone other than A & E might like to have the $400,000,000 that the show generates. The idiocy of A & E is breath-taking in its scope.
When I was in sales, I always remember that my competitor's stupidity was always my best selling point, and in this case A & E is quite the sales asset for their competitors.  This quacks me up.  Some things never seem to change.  All I had to do is to keep my own stuff in order and be responsive to my customers.  You think A & E would do that?  No.  They just shoot their own race horses and then pander to the LGBT psychos when they (LGBT) can't provide any market share.  But the reason is obvious. LGBT is a psychotic-Nazi political tool that is intended to destroy mankind, and A & E is helping that goal by their whimpering and pandering to them.

Rage of the Homo-Nazis
The homosexual issue is a Nazi style political tool intended to destroy society. Marriage between a man and a woman is an essential building block for any successful society. The homo-Nazis continue to engage in religious persecution and they cannot stand to be criticized for their deviant behavior. And this is why I think A & E is pandering to these groups. They aren't men and women enough to stand up against the persecution the homo-Nazis dish out. The end result of this kind of pandering to these groups is a major reason people are getting sick of their programming. To suspend Robertson who is a proven success is a completely crack-brain idea. Who really cares if his remarks offended the homos? I'll betcha most of those 14 million viewers agree with Robertson's analysis. The backlash coming against A & E is encouraging and refreshing; for a change. Hit them where it hurts; in the pocketbook.